Inside: Learn how to make Crockpot peanut clusters easily and almost entirely in the Crockpot!

This crockpot chocolate covered peanuts recipe is literally one of the most popular recipes on my blog. And, I promise that when I tell you I make these often that I’m telling the Honest-to-God truth.

Read on to see how to make these crockpot peanut clusters with some foolproof tips that you’re going to want to know if you decide to take them on. 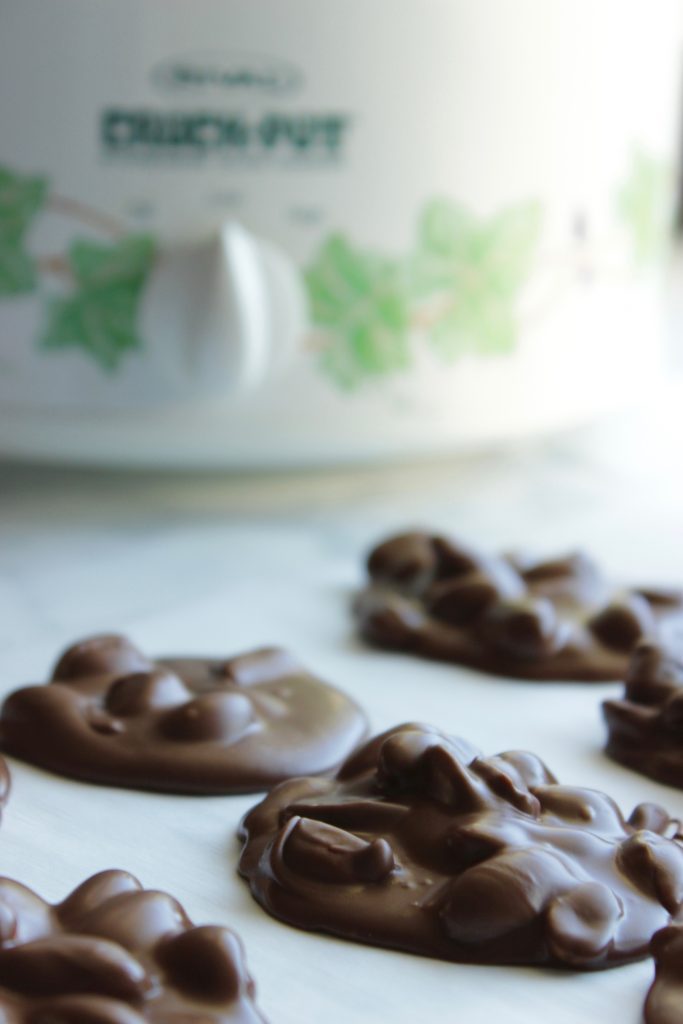 You may have seen my crockpot peanut clusters Facebook video (it went insane on social media!). And, surprisingly, there was a lot of great feedback (let’s be honest, the internet isn’t always the kindest, right?) so I knew that it was a hit.

I’ll be honest, I don’t love baking. I don’t love chocolate, and I don’t love being in the kitchen any longer than I have to be. This is really turning into confession time, right??

But, in my defense, I’ve always been honest that I love recipes that are less than five ingredients. And, many more than seven-eight steps, and I’m outta there like a bad habit. And, if the title has the word Crock Pot recipe in it, or Instant Pot, I’m all about it.

So, that’s probably why this crock pot peanut clusters recipe is one of my favorites!

And, it appears that I’m not alone as every winter and holiday baking season this crock pot chocolate covered peanuts recipe goes bonkers on Pinterest, too. Because I’d assume everyone loves a good crock pot candy, right?

OK, enough chit chatting, we’re on to how to assemble these crockpot chocolate covered peanuts… mmm.

What are the Ingredients for Crockpot Chocolate Peanut Clusters? 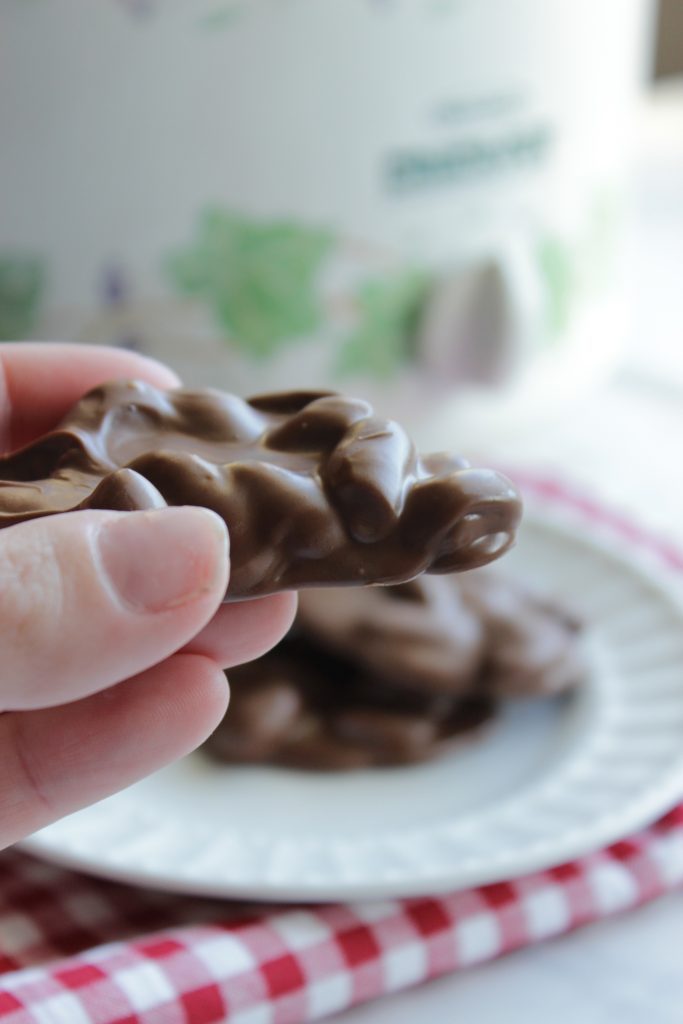 Depending on the room temperature this could take 2-3 hours.

The order of the items being put into the crock pot is really important to avoid burning.

The paper towels under the crock pot lid is really important. There cannot be any condensation in the chocolate mix or you’ll have lumpy chocolate.

The paper towels will 100% solve this problem from happening, so make sure that you take care to be sure the crock pot is covered correctly.

Can I microwave peanut clusters?

Are nut clusters good for you?

Well, I mean … nuts are protein, right?? Of all of the sweets you can consume, I’d say that milk chocolate peanut clusters are among some of the healthier sweets. Atleast I look at them that way 🙂 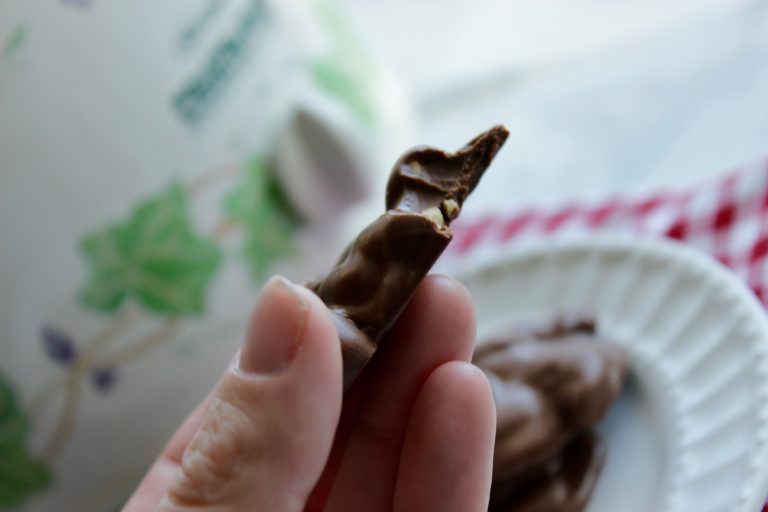 Is this the same recipe as the Trisha Yearwood crockpot peanut clusters?

I am just not sure, but this is the way that I prefer to make them 🙂

What holidays are these chocolate covered peanut clusters best for?

Can I use candy melts instead?

I don’t recommend changing up this recipe at all. In fact, another foolproof tip that I have to share is that the ingredients that I chose for this recipe are there for a reason, for example, if you don’t use enough almond bark, your nut clusters won’ harden correctly and I think that with candy melts you’ll find that the clusters will be a bit dull and sticky.

It’s just the way that each of the candies dries after being melted. So, my advice is to stick with the ingredient list the way it is (unless you’re making them white and I laid out your options above for doing that)

Where do I find almond bark?

Another foolproof tip for you. Do not skimp on the almond bark. When in question, or faced with odd amounts, always choose more. Again, you need the minimum amount for the clusters to set up correctly. 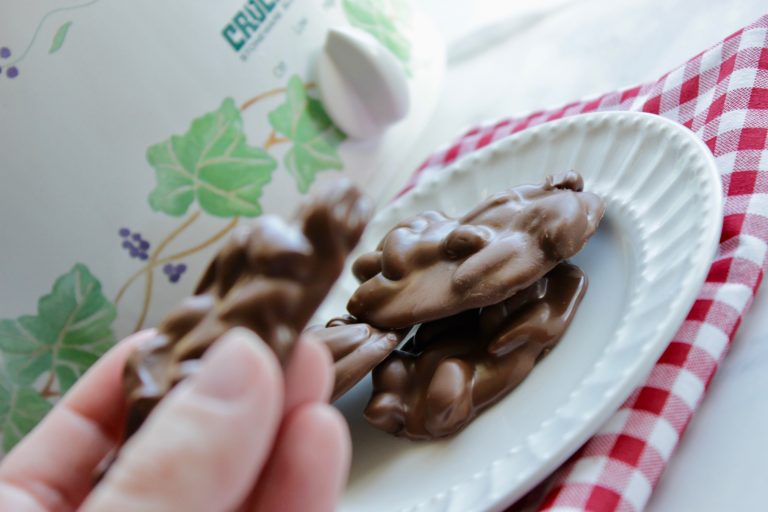 Can I add peanut butter to the crock pot nut clusters?

Shoot. Peanut butter + chocolate = LOVE in my book, but I recommend just letting the peanuts do the talking in this slow cooker clusters recipe. There will plenty of peanut flavor as is.

Can I make these into dark chocolate peanut clusters? 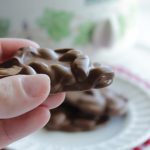 An easy dessert made in the Crock Pot and finished by drying on parchment paper - these are fabulous and everyone will think you bought them from a dessert shop!
Course Dessert
Cuisine American
Prep Time 10 minutes
Cook Time 1 hour 15 minutes
Resting Time 3 hours
Total Time 4 hours 25 minutes
Servings 48 clusters

Depending on the room temperature this could take 2-3 hours. The order of the items being put into the crock pot is really important to avoid burning.