This recipe is not too spicy, not too sweet, just simply perfect for tacos and other Mexican food favorites. 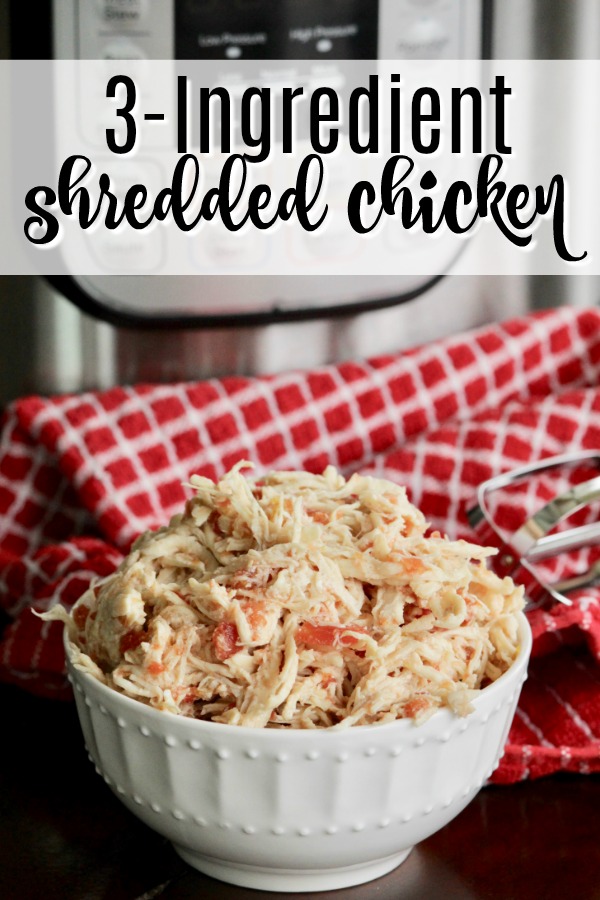 When we all jumped on the Instant Pot bandwagon they were selling out everywhere. At every turn they were “back in stock, sold out, back in stock and sold out again”. I suspect that the fear of missing out became the reason to get the Instant Pot, but I hear a ton of people saying that they never use theirs. Or, they used it once, and never used it again. Or, they’re looking for one and trying to justify the purchase (see the most popular version here). 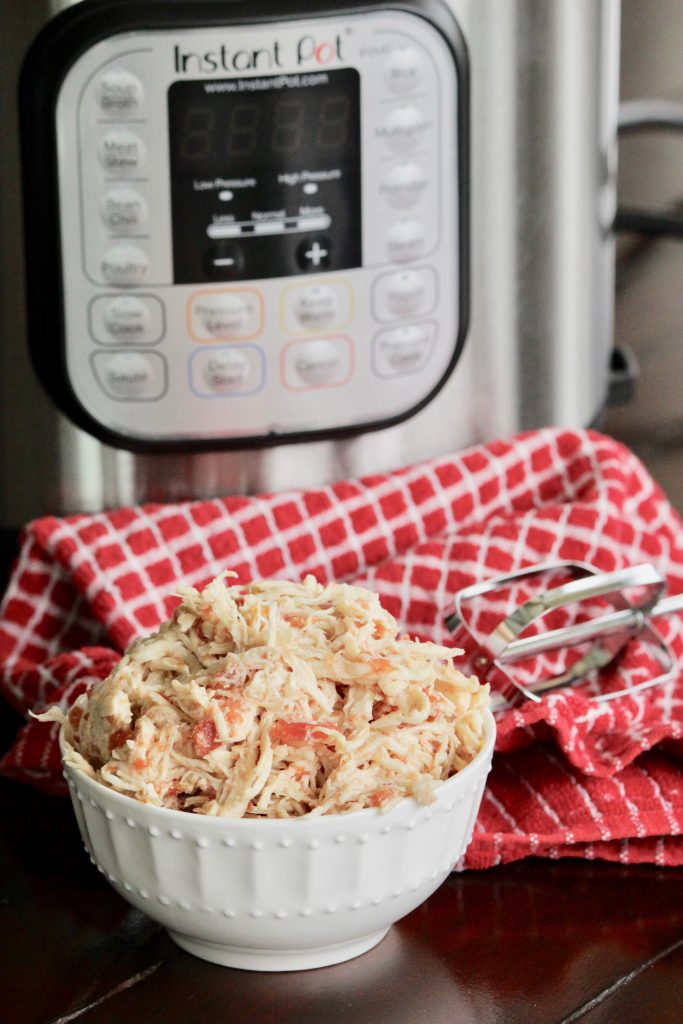 And, then there are the diehards that have thrown away every other small appliance that they owned and only use their Instant Pot. I’m not that Instant Pot crazy, but I’ll be honest I don’t use my Crock Pot as much as I used to.

In fact, I’d guess that I’ve used my Instant Pot ten to one times on my Crock Pot over the last month. The biggest reason though, is this Instant Pot shredded chicken tacos recipe as it’s so versatile, along with my mashed potatoes Instant Pot recipe. We love hearty food around here, can you tell?

But, I haven’t yet tossed my beloved Crock Pots and I don’t have any intentions to, either. They definitely have a spot in my house, just not for chicken taco meat any more (for real!) 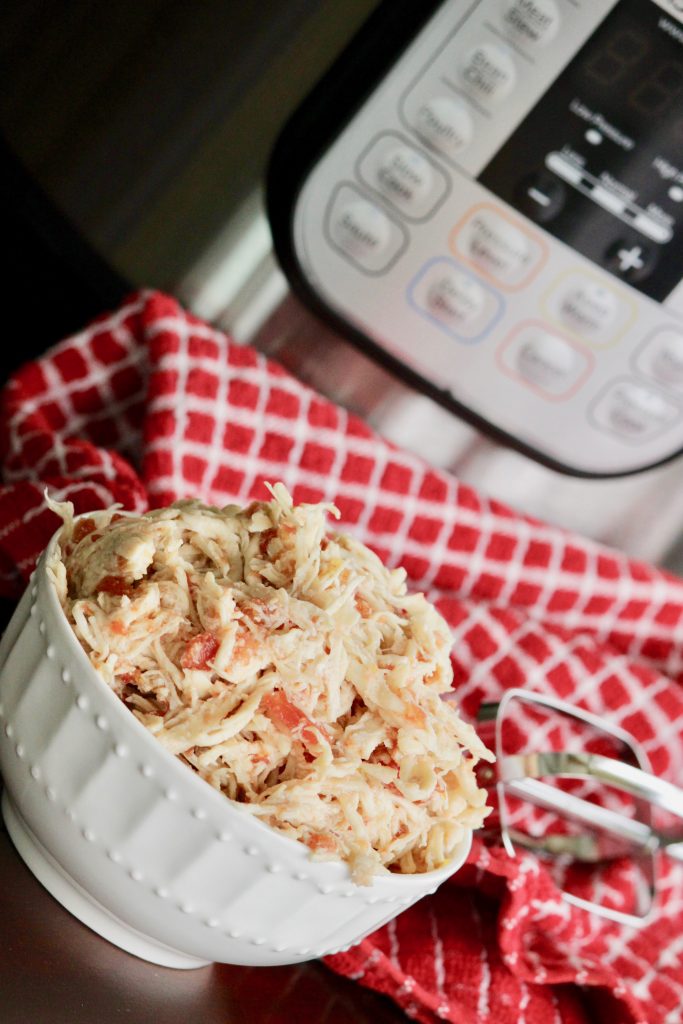 And, my whole entire family loves these kinds of meals to. Oh, did I mention that this is only three ingredients? SO, yah, there’s that too. And, you can definitely make a bunch and freeze it for later, too.

Can this shredded chicken for tacos be used other things, like quesadillas?

I use this chicken for everything Mexican! You can use this to make hard shell tacos, soft shell tacos, tostadas, add the Mexican shredded chicken to queso blanco, taco salads, enchiladas, or, quesadillas. And, of course, there’s always chicken nachos.

It is a great alternative to the regular ground beef taco meat that we’re accustomed to. 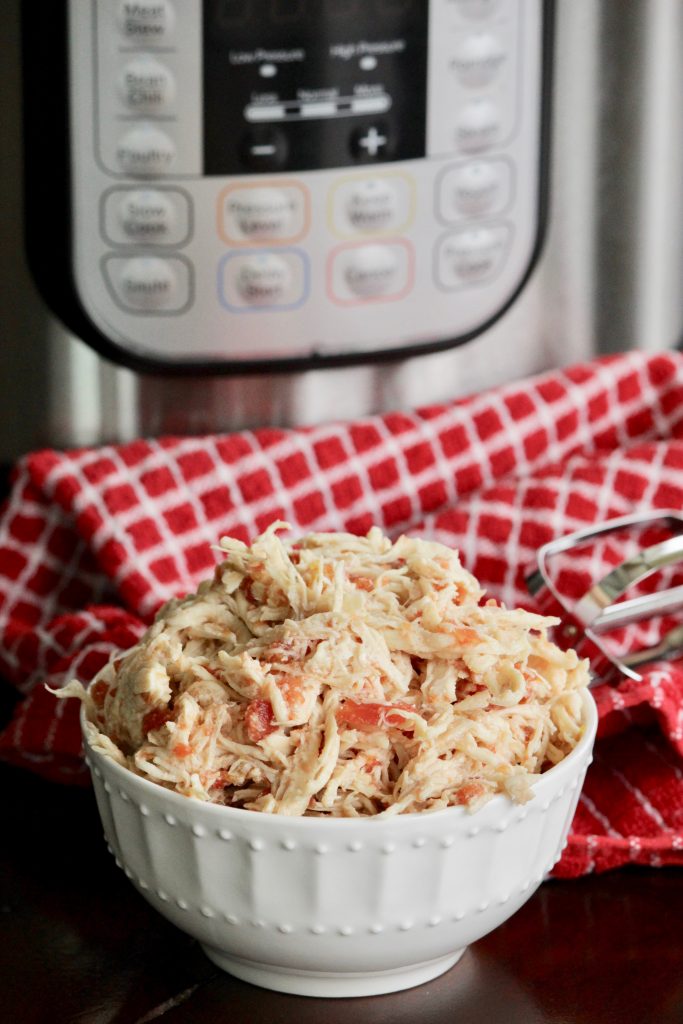 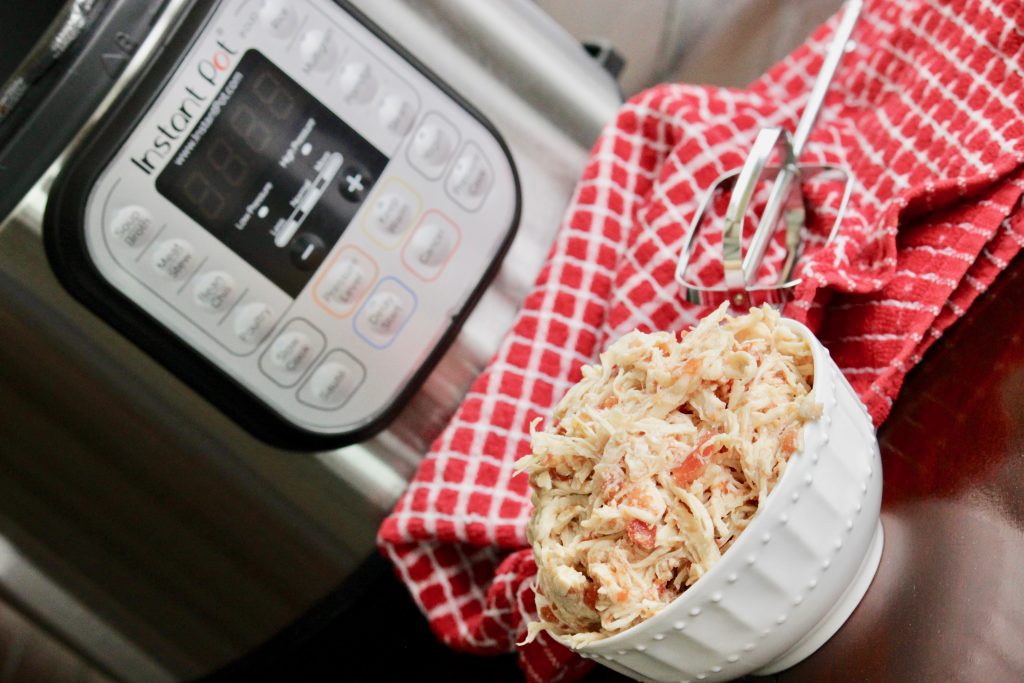 Can you use chicken thighs instead of chicken breast?

You sure can! And, when you make shredded chicken with chicken thighs instead of chicken breast, you’ll end up spending quite a bit less money as well. Use the same cooking times as you would if you were using chicken breasts if you decide to use chicken thighs. 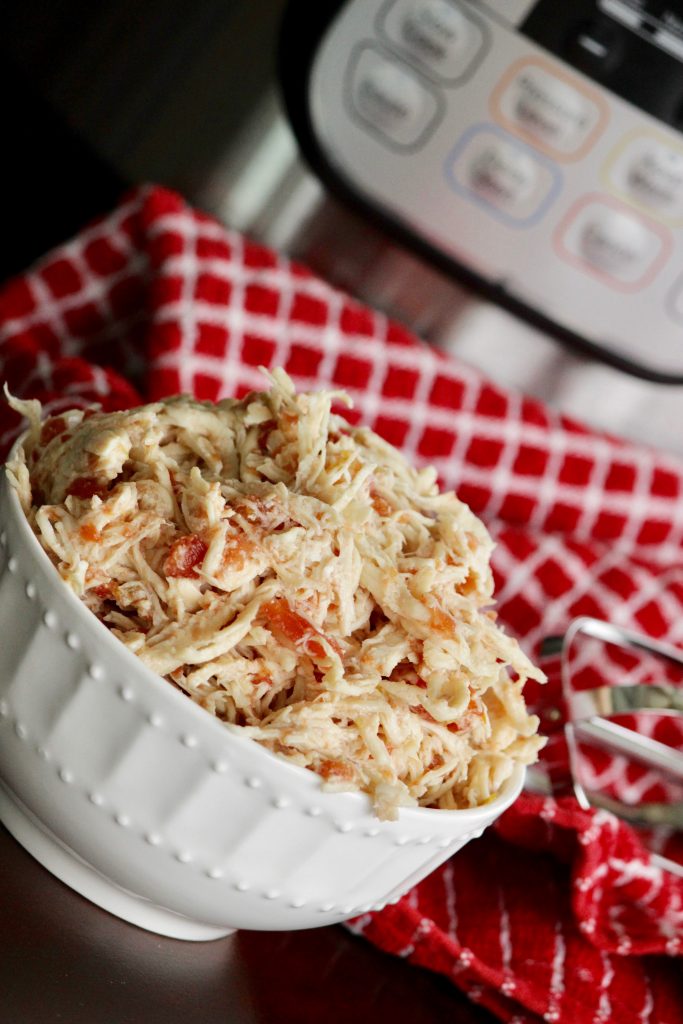 How to Make shredded chicken for tacos:

You’ll want to first gather your ingredients. Chicken, chicken broth and Rotel are all you’re going to need for the most delicious meat for chicken tacos and other Mexican dinner ideas you’ve ever had. 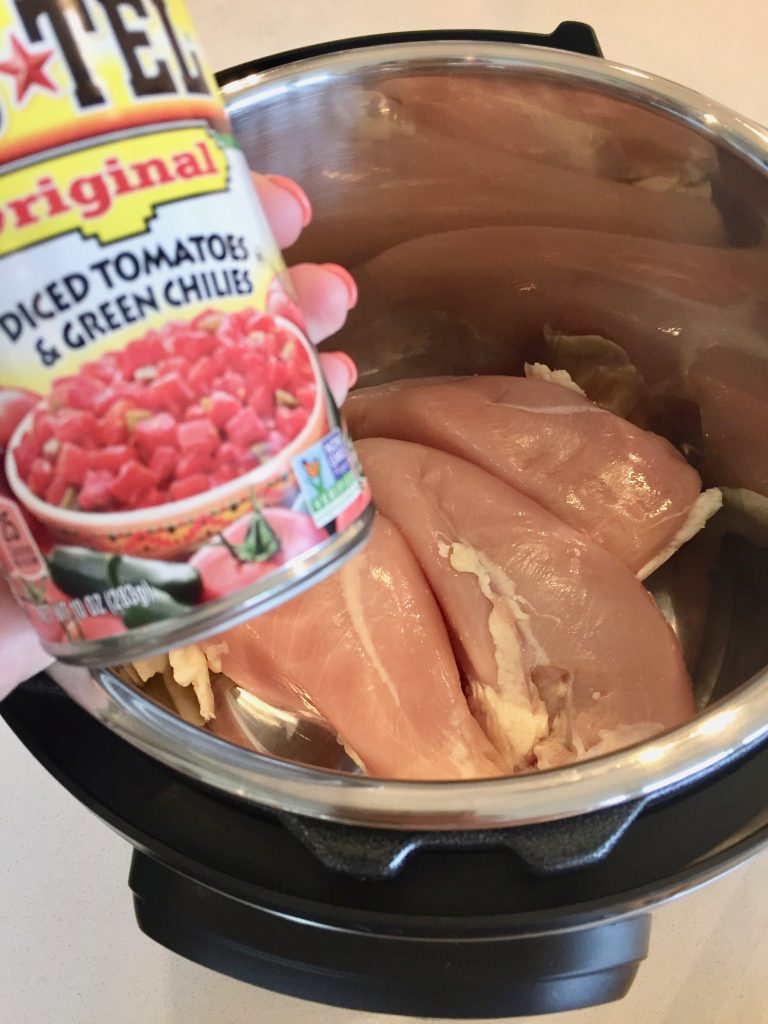 Seal the Instant Pot lid, set the valve to sealed and press the “pressure cook” button and set to high pressure for 12 minutes.

You can do a quick release by flipping the valve to venting (be very careful of the steam!), or feel free to let the chicken do a natural release. Your chicken will be delightful either way. The natural release is what I’ve used, because I like the chicken to be really soft and tender. 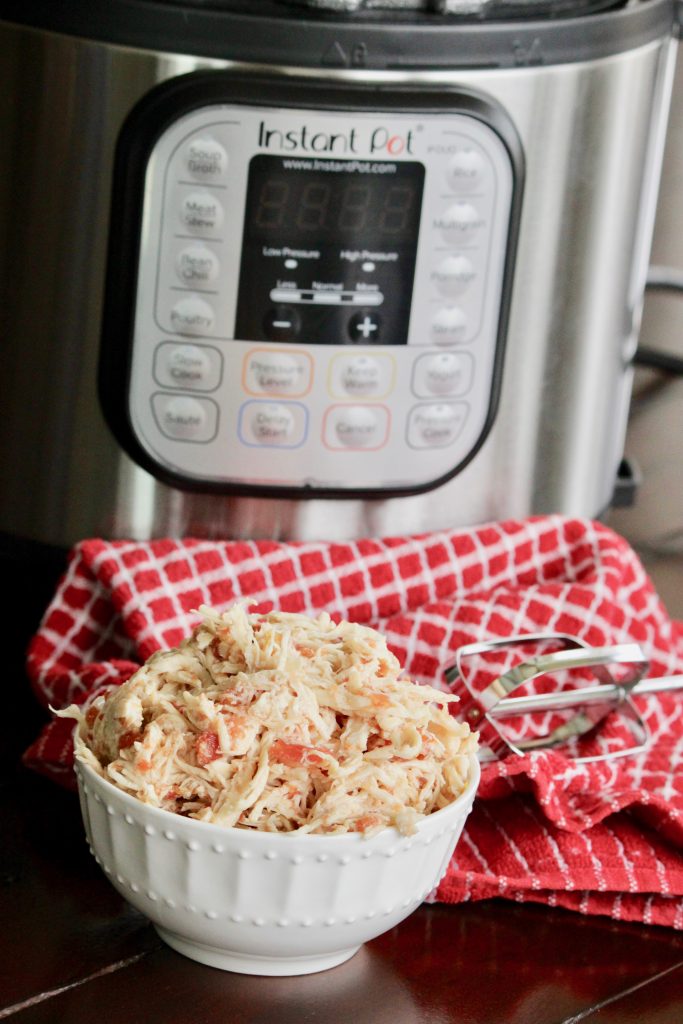 It will be so much faster than using two forks and because the Instant Pot is deep, but thankfully deep enough to not let chicken fly everywhere either.

I hope you love this as much as we do! 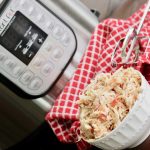 ** I use one can of rotel per pound of chicken